Articulations represent the way an instrument can be played. They are related with the way the player uses the instrument, and the differences can be substantial.

The same instrument with a different articulation does not only sound different: it may even have a different purpose inside the orchestra. Let's have a quick look at the most common articulations.

Let's hear the most common articulations

Notes are played without detaching them from each other. The legato is typical of melodic passages, were the main motif is presented.

This is the opposite of legato. Notes are played so that they are well separated from each other. It's widely used to provide a basic rhythm to the melody.

Trill is obtained alternating between two note as quickly as possible. Most virtual instruments libraries have specific samples for trill, either as half-tone (semitone) trills (i.e. alternating F and F #) and whole tone trills (alternating F and G).

The example above has a whole tone trill followed by an half-tone one.

I think it's a very clean representation of the articulations available for a single instrument. There are legato (obtained by selecting the sample sus), staccato (stac), the whole tone trill (trill tone), and the semitone trill (trill half-tone). 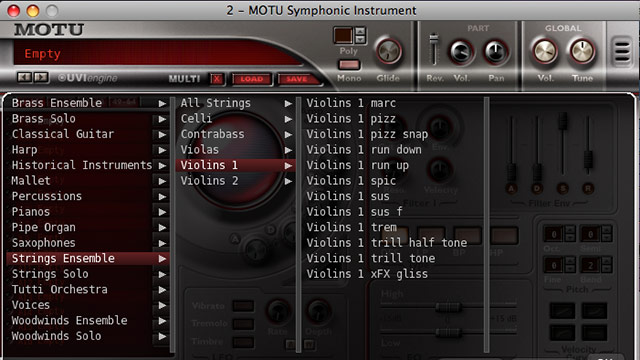 Dynamics refers to the intensity -not necessarily the volume- the notes are played with. The crescendo is the progressive increase (from pianissimo to fortissimo, or from piano to forte, and so on).

Likewise, "Diminuendo" is the opposite movement: from notes played strongly to others played softly.

The example has a violin doing a crescendo and then a diminuendo.

Importance and usefulness of articulations

Alternating articulations and changing the dynamics is a great way to make a music piece more interesting and realistic. After all "monotone" means also boring.

The most common mistake when using the virtual instrument, in fact, is to choose an instrument and keep using the same type of samples throughout the entire song. The result is a performance where a violin or a guitar plays all the notes in legato, or in staccato, which never happens in a real performance.

Switching between articulations makes our music more interesting for the audience: the human ear, in fact, tends instinctively to relegate in the background the sounds that remain the same, and pay more attention to the new music material.

So, using different samples from the same virtual instruments, is an easy way to improve our music. Try alternating staccato to legato and exploiting the entire dynamic range from pianissimo to fortissimo to make your song more appealing. Not to mention that the virtual instrument will seem to produce a more realistic performance.